turn up the volume 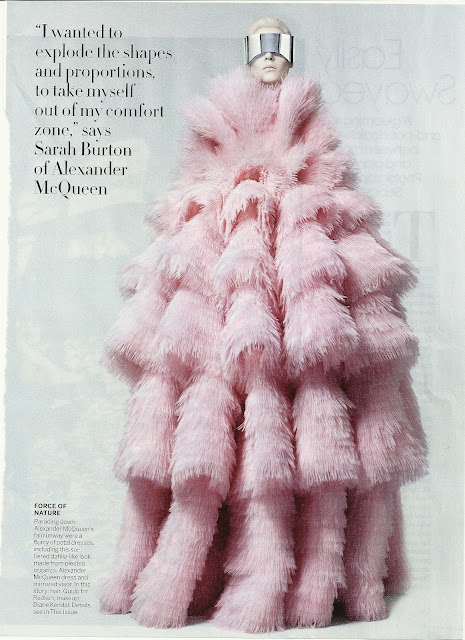 I may as well let this picture explode on the page with its volume. This piece is a bit different than Catherine's Sarah Burton wedding gown a year ago, don't you think. I love the pink ... wonder what's underneath all of that ... fluff!

In UK Vogue this month, one of the editorials photographed was volume. I'm not quite sure what woman wants to add volume to her ... volume, but it makes for an interesting editorial statement.

Of course this look is not a new one and it reminds me of the Isaac Mizrahi collection that was created as he was being documented in the film Unzipped. I loved the film! It was a true, behind the scene, look at fashion. It followed his creative process and to some extent the lives of the supermodels that he used in his shows. And supermodels they were ... Cindy Crawford, Linda Evangelista, Naomi Campbell, and even Kate Moss.

One of the inspirations for the collection was the 1922 film, Nanook of the North. Isaac wanted to create a luxurious collection and imagined a beautiful woman out on the tundra looking fabulous. He attributed the collection to a film actress in a film, but I can't recall it. I can recall the picture of her with a dewy complexion, wrapped in white fur. Of course between the two inspirations, he created for what at the time was modern in 1995. You can see to the right Naomi Campbell on the runway in the vividly colored mini-Nanook jacket. Doesn't look too much different than the Burton, eh?


Here's another picture of the collection that shows the hood. Mizarhi was a riot as he explained that the fur hood and accompanying jumpsuit would be the perfect outfit to throw on to walk the dog. You can see the model on the right in the picture wearing it. Now if I had the money to burn, and the desire to do this look, I think that the thing to do is find these Mizrahi pieces. Wearing it vintage would be the way to go ... and if one could find the costumes from Nanook's wardrobe ... hmmm, maybe even better, if it was re-styled and all.

I have to tell you ... I do have a bias for Mizhari. First, he makes beautiful clothes. Second, I think that he's a genuine person. I stood outside a restaurant not long after his documentary was released waiting for my companion to get the car, and who do you supposed walked up to the restaurant? Isaac Mizhari! He was in town for an appearance at Niemann Marcus. I was so excited and when he came close, I blurted out, "Issac!" He said hello. And I squealed, "I loved Unzipped!" He hugged me and said, "I love you!" Of course he does! I'm not sure how many fashion designers get the rock star reaction ... well, maybe in Japan, but in the Midwest?