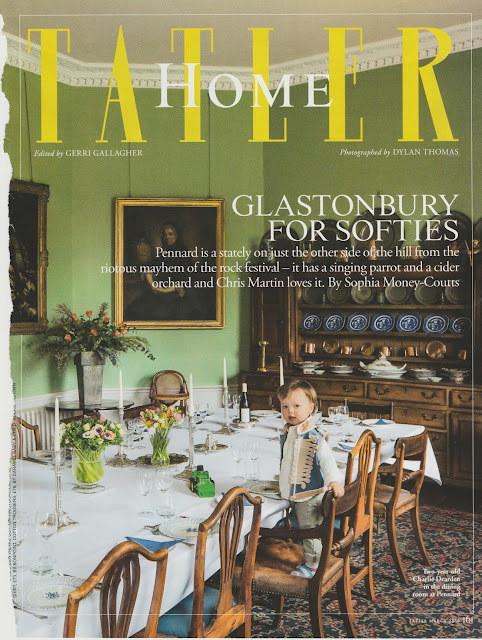 If I ever go to Glastonbury Music Festival, this is where I will be staying. Penard is the home of "the Dearden family. Harry and Georgina Deaden and their two-year-old son, Charlie, live in a big house village of East Pennard. The house, called Pennard, sits on one side of a grassy hill, and Glastonbury happens on the other side. The house was here first, having been build in 1600 by on of Harry's ancestors. But ever since Michael Eavis launched his festival in 1970 (when tickets cost £1 and the event was headlined by Tyranosaurus Rex, before they were known as T.Rex), the Dearden family have been closely linked with the annual shindig."

Sign me up!  I am one that doesn't necessarily find the romance of 'roughing it,' especially in the mud as 've heard that the Glastonbury Festival becomes knee deep in the stuff. When I decided to do the Camino de Santiago pilgrim's walk across northern Spain, I read that many pilgrims walk/run to chase beds at albergues (pilgrims' hostels) along the way. I am not what you would call the original fast walker, so the idea of having to hustle through a 10-15 mile walk through the hills and valleys of a country that I've never visited before to grab a cot to rest what would become my very tired bones? No, thank you. Not that I need to be fancy. I would probably wear the same pair of shorts every day and wear my hair in a pony tail. But I would want to take my time. Stop. Admire. Talk. Have a cup of cafe con leche. I found Spanish Steps, a company that specializes in the Camino. Run out of Aspen, Colorado, the woman who owns the company turned her passion for the walk into a business. She planned trips for people like me .... I didn't want to race the Camino, I wanted to enjoy it.

And that I did. I was lucky to end up with a tour of two: me and Claire, a teacher from Australia. Lorraine our guide, an original hippy, was so frustrated with us because we would want breakfast, do the entire walk in our good time, then eat, drink, and be merry. She kept trying to get us to stop for a gourmet luncheon that she prepared, but she was working with school teachers. Get up and go! Claire was a much faster walker than I; although, she said I only was ever 5 minutes behind her. So I had the trails to myself for the most part, which I was glad of. Until the end, most of the walk is through hill, forest, and country lane. I encountered little old farmers wearing raggedy old suit jackets, deer that flew across the lane into a dark pine forest as I passed, and kindly priests who were happy to have a chat when I would ask for my pilgrim's passport to be stamped.

Along the way, Claire and I stayed in three different country inns, each one more delightful than the next. Each morning, we would have breakfast and Lorraine would drive us to our stopping place from the night before. She would give us an estimate of the number of miles that we would be expected to walk before we were picked up to go back to a hot shower, comfortable bed, and lots of vino with dinner. I think that we walked anywhere from 12-17 miles a day.

My favorite inn was an estate that had been in the proprietor's family for over 300 years. Two brothers and a sister changed the gentleman's home (the boys didn't have a profession) into an inn to refill the family's coffers. All three were well into their thirties near forty, and none were married. Our rooms were converted a cow barn, so stood separately from the main house. I loved that I slept where the cows had once done. After freshening up, we would spend time wandering in their many gardens in a golden late afternoon light. We'd meet up with our hosts to sit alfresco under flowering arbors on stone benches that must have been there for a century. We'd drink the local wine, talk, and work up an appetite for one of the brother's splendid meals. It was a truly lovely stay there. And a memory that I return to often.

Could I find the same romantic notions in a mud field sleeping in a tent that's not quite secure? Probably ... but why? I will be staying with the Dearden's when I go to Glastonbury. Hey, Chris Martin (a regular), here I come!
Posted by miss moran at 8:31:00 AM