The magazines are filling up with inspiring Olympic backstories that I love to read. I picked up "Real Simple" in the grocery store because I have gotten used to reading the one delivered to a woman who no longer lives in my building. I think that the source has dried up. And I'm testing it to see if it's one that I will put in regular rotation. So far, it's looking promising.

This month, several female athletes are featured, and these are the two that I found most interesting. At left if Alysia Montano, her mother Yvonne, and daughter Lennea. The story begins: "Alysia Montano was a favorite in the 800-meter race during the 2012 London games. Then age 26, she has been competing against some of the world’s top runners for nearly half her life. But in the race Alysia came in fifth. She suspected something was up. Three years later, the World Anti-Doping Agency released a report revealing that many athletes had tested positive for performance enhancing drugs ..." Two of the athletes in front of her fifth were suspected of doping. Alysia thought to quit track, but she moved on. And in the 2014 USA Outdoor Track and Field Championships, she competed while EIGHT MONTHS PREGNANT. Remarkable. Her mother, Yvonne, is lucky to help with young Lennea while Alysia trains for the 2016 Rio Olympics. I read the headline of a "Chicago Tribune" commentary today that recommended Russia be banned from the Rio Games because of doping. It's a nasty reality of competitive sports anymore, and I hope that the drug tests are such that an inspiring athlete such as Alysia will run against a clean field so that her hard work wins, not a performance enhancing drug. 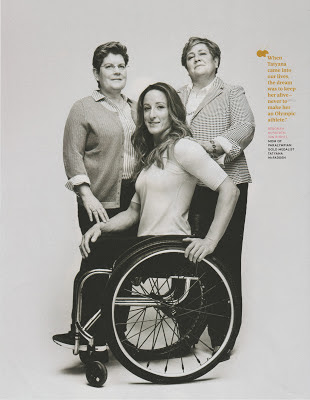 Tatyana McFadden (right) "was born in Leningrad, Russia, in 1989, with a hole in her spine. Paralyzed from the waist down, she spent her first six years in an orphanage and taught herself to walk on her hands. Two decades later, she is the only athlete in the world- male, female, able or disabled- to win the grand slam of marathons, finishing first in Boston, London, Chicago, and New York in the same year, 2012, as well as in 2013 and 2014." How did she get here? Deborah McFadden was visiting an orphanage in Russia while on business and Tatyana kept coming up to her. Not able to get her off of her mind, she and her wife, Bridget, decided to adopt her. Deborah says, "There is this Russian phrase Ya, sama, which basically means "I can do it myself." And no matter what we exposed Tatyana to, she said, "Ya, sama." We were told she wasn't going to have a long life because she was so weak and had so many physical challenges." I don't think that is a problem now. And I'm thinking that I need to weave some "Ya, sama" into my students' thinking. They have a lot to overcome, but none so much at Tatyana.
﻿﻿﻿﻿﻿﻿﻿﻿﻿﻿﻿﻿﻿﻿﻿﻿﻿﻿﻿﻿﻿﻿﻿﻿﻿﻿﻿﻿﻿﻿﻿﻿