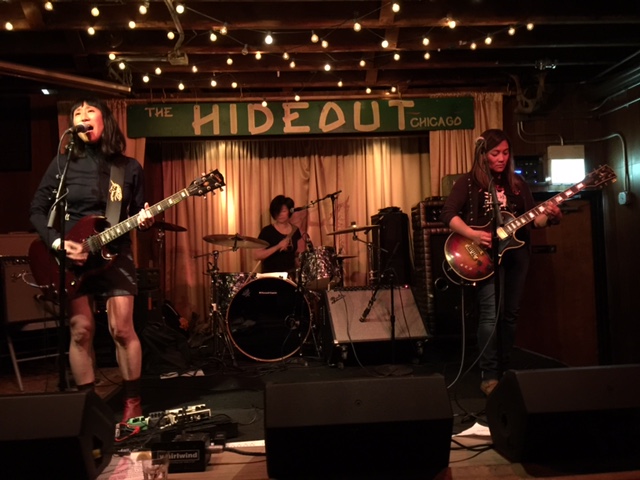 What better way to spend a Saturday night watching a band at a bar! Kim performed after a decade or more hiatus for a single reunion show. And it was worth the wait. The blend of 2 guitars, a drum kit, and joy made me want to get up and dance. The crowd was in it, though rather tame, but my friends and I made the best of it by doing some serious stool-dancing.

Miss Mia, the band's drummer and vocalist, sends out a monthly newsletter to, among many things, name and date the many appearances/performances that she has at any given time as a gal about town. Miss Mia acts, cable access TV hosts, benefits, performs, and yoga-s. I don't know how she keeps up with everything ... she had mentioned the gig in the newsletter, and I suppose that I was low-key determined to go to show my support.

Miss Mia is the host of "Chi-ca-go-go," a cable access show that is super dance party and music show for children. As part of the show, she interviews visiting musicians with her sock puppet, Ratso. A few years back, I got the call that she was interviewing Glen Hansard during the time of his "Once" fame at the Hideout's annual Block Party. I went along and was happy to get the opportunity to be a degree separation from Bono! (Glen Hansard is Irish ... and all Irish people know each other, right? But he also busks with Bono every Christmas Eve on Grafton Street in Dublin). I have a picture of the two of us where I look to be Hansard's sister. In the sun, our hair glistens the same copper red, and one could not dismiss the similarity of our Irish mugs. Later in the evening after he had performed, another friend pushed me toward Hansard back stage for a chat. I am not meant to be that close to ... celebrity, for lack of a better descriptor because I was a mumbling idiot trying to talk to him. He was very kind and did his best to keep up with my ... awkwardness.

I'm much better at a bar and a band of local lore. I happily asked Mia over to meet my friends, who found her, and the band, to be quite spectacular.